Ante Sundaraniki is all set for its world tv premiere date  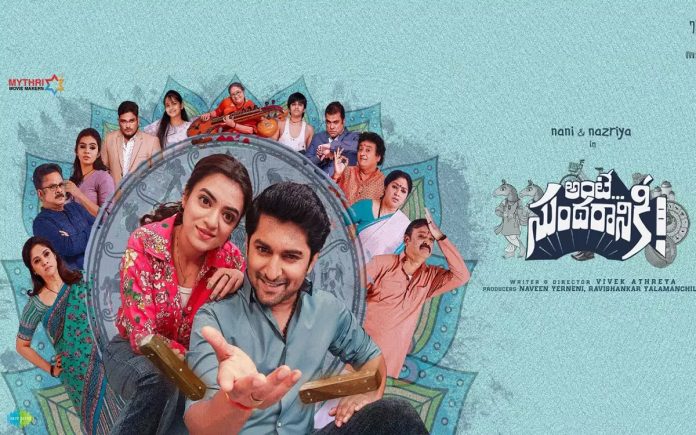 Natural Star Nani’s recent romantic comedy drama Ante Sundaraniki received an average talk and failed to succeed at the box office. The director Vivek Athreya wielded a megaphone for the movie. It was released in theatres on June 10 and it is now available on the OTT platform Netflix.

And now, it is all set for its world television premiere. So far, we have seen many blockbusters like RRR, Pushpa:The Rise, Vikram, etc on small screens at the weekends. Now, Ante Sundaraniki has also joined the list to provide an abundance of entertainment for the audience.

It is said that the movie will be premiered on October 2nd at 6 pm on Gemini TV. The film has impressed a few sections of the audience during its theatrical run and later, it stood in no.1 position on Netflix in terms of streaming minutes.

Malayalam cutie Nazriya played the female lead and this is her first movie in the Telugu language. It also features Anupama Parameswaran, Harsha Vardhan, Naresh, Nadiya and others in supporting roles. At present, Nani is busy with the shooting of his upcoming movie Dasara, directed by Srikanth Odela.