HomeNationalCongress is all set to organise president polls on Oct 17

Congress is all set to organise president polls on Oct 17 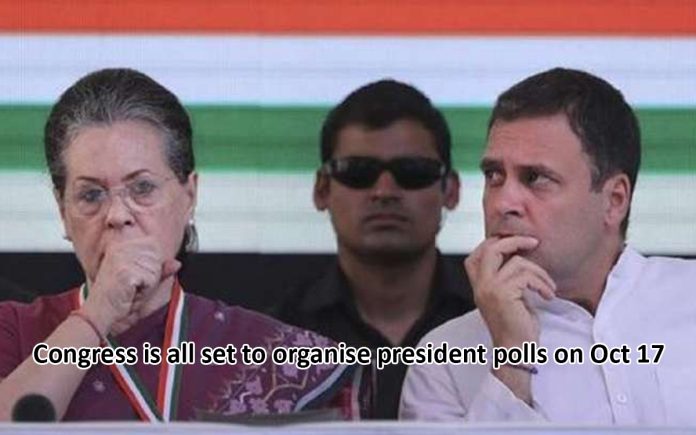 For the honorary post of Congress president, the election will be held on October 17 and the results will be announced after counting on October 19 after the Congress working committee gave its stamp of approval. The notification for the election will be issued on September 22 and the date for the filing of nominations will be between September 24 and 30. October 8 will be the closing date for nominations. As Congress president Sonia Gandhi is traveling abroad for health checkups and presided over the CWC meeting, she joined the meeting virtually.

The election schedule was approved unanimously, the party’s organization in charge Mr. K.C.Venugopal said. It was announced by the Congress party in October 2021 that the election of the new party president will be held between August 21 and September 20, 2022. The internal elections in Congress have been deferred by two weeks. Several leaders of the party and workers want Rahul Gandhi to take over as party chief.

All three Gandhis have reportedly made up their mind that a non-Gandhi should lead the party. There is great bewilderment about who will take over as party chief. Many claims that Rajasthan chief minister Ashok Gehlot is the front-runner. But Gehlot said he would work hard to ensure that Mr. Rahul Gandhi becomes the party chief. The meeting of Congress’ apex body came against the backdrop of the resignation of party veteran Gulam Nabi Azad, who ended his 50-year association with the party on Friday. Azad was also a part of the G-23 grouping of change-seekers who had written a letter to Mrs. Sonia Gandhi in August 2020.