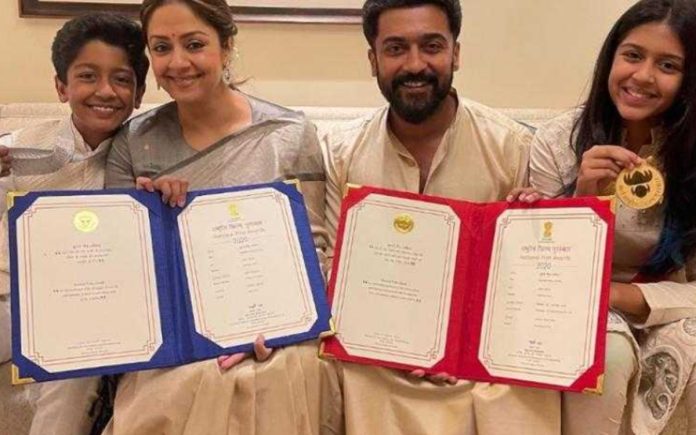 The celebrity couple has taken pictures of themselves in their happy mood, holding the winning certificates of each other and they occupied the whole internet by sharing their photos on various social media platforms. All the fans and netizens showered their comment section with congratulatory wishes.

Soorarai Pottru was directed by Sudha Kongara. Suriya has recently appeared in the critically acclaimed films such as Jai Bhim and obviously Soorarai Pottru. He also appeared briefly in Madhavan’s Rocketry: The Nambi Effect and Kamal Haasan’s Vikram. He will soon appear in a brief cameo in the Hindi remake of Soorarai Pottru, which has Akshay Kumar as the lead.

The 68th National Film Awards for the year 2020 were held at New Delhi’s Vigyan Bhawan on Friday. President Darupadi Murmu conferred all the winners with the prestigious award.