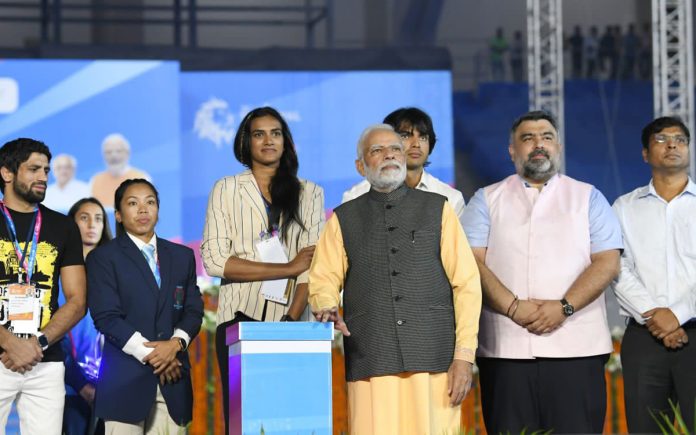 Prime Minister Narendra Modi launched 36th National Games in Ahmedabad on Thursday. National Games are being held in the state of Gujarat for the first time. Games will be organised from 29th September to 12th October. Nearly 15,000 sportspersons, coaches, and officials from across the country will be participating in 36 sports disciplines, making it the biggest National Games ever. The sporting events will be organised in six cities of Ahmedabad, Gandhinagar, Surat, Vadodara, Rajkot and Bhavnagar in Gujarat state.

“When the event is so wonderful and unique, its energy is bound to be this extraordinary. The victory of the players and their strong performance in the sporting field also paves the way for victory of the country in other fields. The soft power of sports enhances the country’s identity and image manifold. Savaj, the Asiatic lion mascot reflects the mood of fearless participation among India’s youth. When infrastructure is of good standard, morale of the athletes also soars. We worked for sports with a sports spirit. Prepared in mission mode for years through schemes like TOPS. Efforts like Fit India and Khelo India that have become a mass movement. Sports budget of the country has increased by almost 70 per cent in the last 8 years, said PM Narendra Modi, speaking at the opening ceremony of National Games.

During the event, the Prime Minister also inaugurated the world-class “Swarnim Gujarat Sports University” in Desar.

The Prime Minister recited the Key Words of the National Games Anthem ‘Judega India – Jeetega India’ to the rousing accompaniment of everyone present in the stadium. He said that the confidence shining on the face of athletes is a precursor of the coming golden age of Indian sports. He also praised the capability of the people of Gujarat for organizing such a grand event at such short notice.