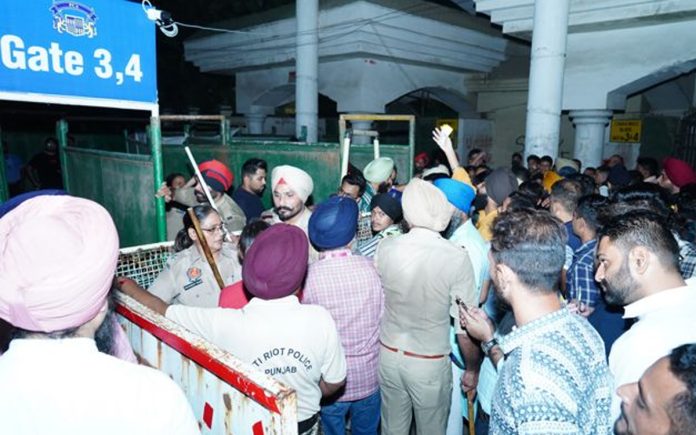 As usually Hyderabad Cricket Association (HCA), which is known for its corrupt, lackluster and laidback ways has messed up the tickets sales for India Vs Australia T20I match to be held in Hyderabad. Keeping in view its track record, no one expects fair practices and proper administration from HCA, but this time, cricket body has taken their shoddy work few notches up. Due to lack of proper communication and arrangements at Gymkhana Ground, where tickets are being sold, a violent stampede occurred at Gymkhana Grounds. To control stampede, police resorted to lathicharge making matters worse.

As HCA announced that tickets for India Vs Australia T20I match will be sold from 10 AM onwards on Thursday, cricket fans lined up at Gymkhana Grounds from early morning itself. Some even waited till night for the sales counter to be open. The line was so big that it even went past Paradise Circle. As soon as the ticket sales started, panic and commotion started leading to stampede. In the ensuing lathicharge many even fell unconscious and were taken to hospital.

Cricket fans have complained that HCA has been selling tickets in the black market and therefore not offering tickets for all stands through offline counter. Fans alleged that only two categories of tickets are being sold through ticket sales counter, while remain tickets are being blocked by HCA authorities.