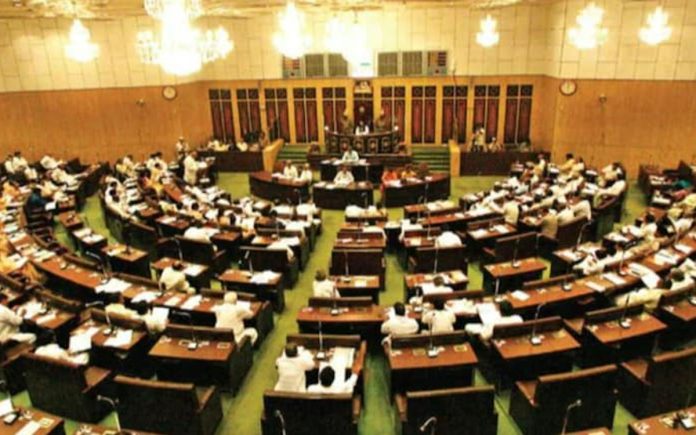 Opposition Telugu Desam MLAs were suspended from the Andhra Pradesh Assembly for the third consecutive day on Monday as they violated rules and pressed for a discussion on various issues of farmers. As the situation worsened, assembly speaker Tammineni Sitaram suspended all the TD MLAs for a day.

TD legislators demanded a discussion on farmers’ difficulties and showed placards asking, “CM Jagan, when will you pay the amount for procured paddy?” etc. They created scenes when the minister for water resources was giving answers to questions on the Polavaram project. TD MLAs claimed that Jagan promised to give Rs 10 lakh each compensation to Polavaram displaced persons but did not do so.

Minister Rambabu said the TDP government had provided only Rs 6.86 lakh as compensation but the chief minister YS Jagan Mohan Reddy increased it to Rs 10 lakh and orders were issued. He also said that Chandrababu Naidu ruined the Polavaram project with reckless planning. The Assembly was adjourned by Speaker Sitaram several times to control the situation.

The assembly resumed discussions but TD MLAs climbed on to the speakers’ podium demanding a discussion on farmers’ issues, but the demand was rejected. Speaker Sitaram appealed to them to cooperate with him for the smooth functioning of the assembly but this did not help restore order. Finance and legislative affairs minister, Buggana Rajendranath proposed to suspend the TDP MLAs and the speaker suspended all opposition legislators for a day.